Congratulations to Franklin ISD staff for making FISD one of the top school districts in the state of Texas!

Our students and staff did a fabulous job creating this video, please take a few minutes to see all of their hard work and get all the bond information you need. 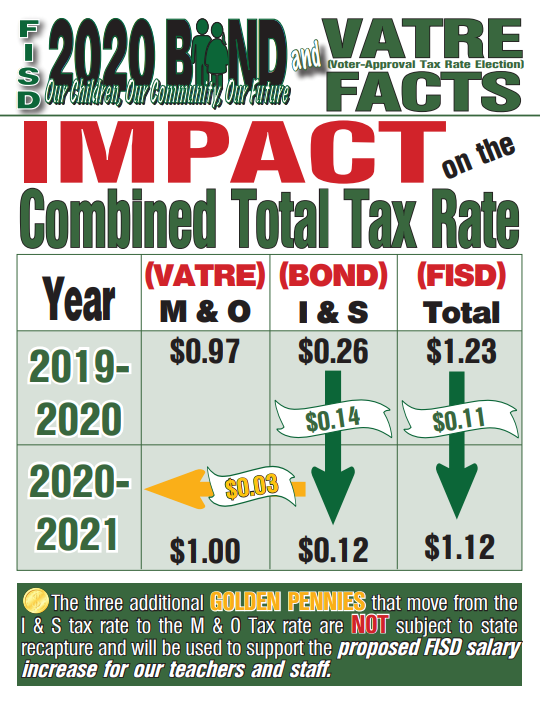 On November 3rd, the Franklin Independent School District is asking residents to vote on a Bond Election and a Voter Approved Tax Rate Election. Proposition A is a bond election that is funded by the I&S tax rate. The bond will address the district's needs to provide updates and renovations in areas including school safety, mechanical systems, kitchen equipment, playgrounds, lighting efficiency, parking lots and buses. The district expects to address these needs while lowering the I&S tax rate 14 cents in 2020. Proposition B is a Voter Approved Tax Rate Election (VATRE). A successful VATRE would allow the district to increase the M&O tax rate above its current state compressed M&O rate. The M&O rate would be increased three cents. The three cents would be moved from the interest and sinking or I&S tax rate, which pays for bonds, to the maintenance and operation or M&O tax rate, which pays for operations. The M&O fund mainly pays for staff salaries and benefits. If the penny swap is approved, the district’s “golden pennies” — as the cents not subject to recapture are sometimes called — would increase from 5 cents to 8 cents. These three additional golden pennies would be used to support the proposed salary increase of the district’s teachers and staff. The district’s ability to move these three additional golden pennies from the I&S tax rate to the M&O tax rate and not be subject to recapture came from House Bill 3, the school finance bill from the last legislative session. By lowering the I&S rate by fourteen cents (Proposition A - Bond) and then increasing the M&O rate three cents (Proposition B - VATRE), the overall FISD tax rate would decrease eleven cents. In property rich districts like Franklin ISD, the recapture system in Texas takes a significant portion of our locally generated revenue. Golden pennies as well as Bond pennies are not subject to recapture. Since 2005, Franklin ISD taxpayers have seen over $162 million of our local tax dollars sent to the state in recapture. For Franklin ISD, a successful Bond and Voter Approved Tax Rate Election (VATRE) means the district would continue to be able to operate with tax dollars that are not subject to recapture by the state. If these dollars are not available, the district would have to cut expenditures. Cutting expenses means cutting the number of people who work for the district since personnel is approximately 80 percent of the district’s operating budget. Franklin ISD’s job is not to advocate for people to vote one way or the other, but rather to inform voters about the details of the propositions. One thing FISD wants to make sure people understand is that this is not a tax increase. While the item on Proposition B will be listed on the ballot as an increase in the M&O tax rate, the corresponding decrease in the I&S tax rate will lower the overall FISD tax rate by 11 cents. 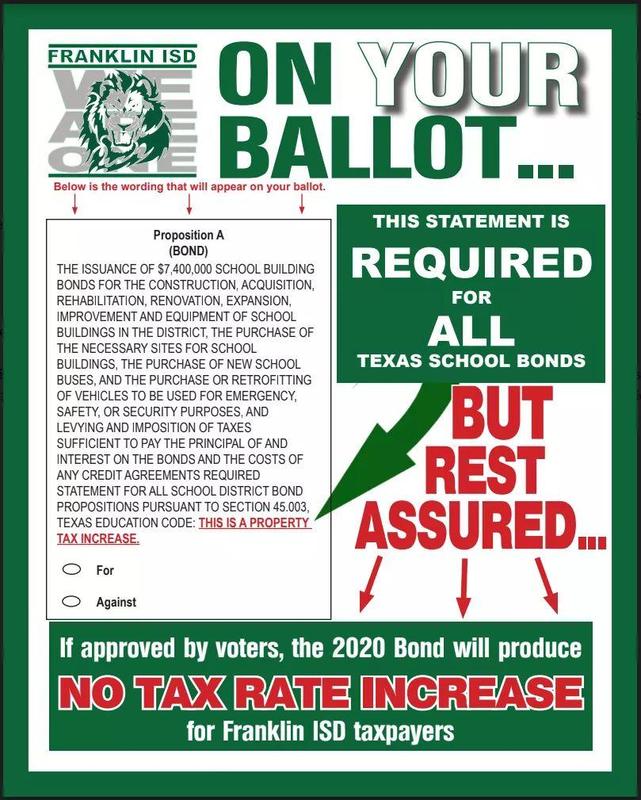